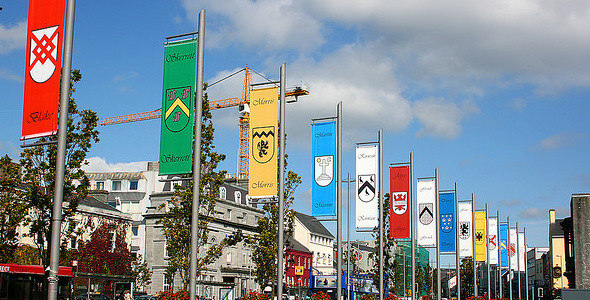 After your arrival we will drive to Galway through the wild and lovely countryside of Co Clare. Depending on time, and how tiring your journey has been, we can take in a visit to the Cliffs of Moher, linger for a while on the lunar landscape of the Burren with its rare wild plants and ancient Dolmens or watch the traditional boats or currachs sailing on Galway Bay while we take a break in Kinvara to visit Dunguire Castle.

Galway, known as the City of the Tribes, is the capital of the west and is a thriving commercial centre and a university city with lively nightlife and many excellent pubs and restaurants. 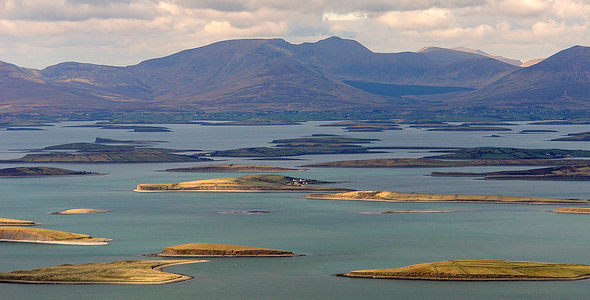 Connemara, an area of rugged landscape, bogs and mountains, is known for its clear light and unspoilt beauty and is, as a result, a favoured area for artists. Clifden, nestled at the foot of the twelve pin mountains, is a renowned centre for breeding of Connermara Ponies and was also the landing point for the first transatlantic flight.

Westport House, the seat of the Earl of Altemount, overlooks Clew Bay where there is said to be an island for every day of the year. As well as being a mecca for anglers, Foxford is home to the famous Woollen Mill, founded by a nun in 1892 and today supplying many top fashion houses. 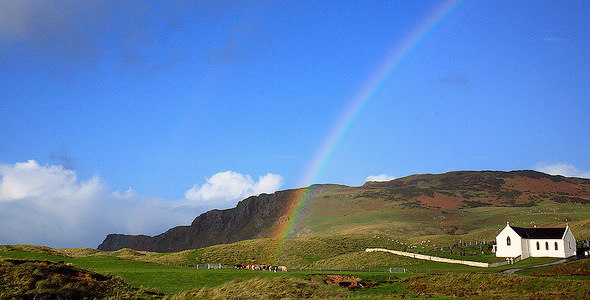 Leaving Sligo we pass the graveyard at Drumcliffe, dramatically situated at the foot of Ben Bulben, and the burial place of W.B. Yeats. A visit to Donegal town is hardly complete without stopping at Magees Wool and Tweed shop, one of the largest manufacturers of Donegal Tweed.

Killybegs is one of Irelands largest fishing port and home to some of the largest trawlers working in this part of the world. You will pass some of the most stunning scenery in Ireland en route to the highest sea cliffs in Europe at Bunglass. Glencolmcille is an Irish speaking village named after St Colmcille who founded a monastery there in about 550AD. 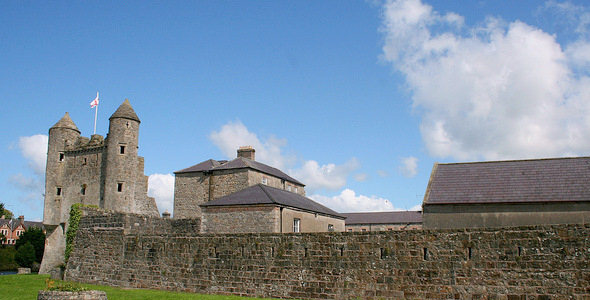 Cross the border with Northern Ireland to-day, stopping the little village of Beleek, home of the famous pottery. A drive through the nature reserve along the banks of Lower Loch Erne, bring us toEnniskillen where a wealth of attractions include the 15th Century Enniskillen Castle, the Palladian mansion at Florence Court and the eerie but spectacular Marble Arch Caves.

Just beyond Omagh the Ulster-American Folk Park, built around the former home of Thomas Mellon, has more than 30 reconstructed historic buildings and is one of the best museums of its kind anywhere. Derry (or Londonderry) is a walled city and most of the 17th century walls, and entrance gates, are intact around the old part of the city.

The 13th century Dunluce Castle, formerly home to the chieftains of Ulster, is perched precariously on a cliff top not far from to-day’s most spectacular stop – The Giant’s Causeway. This extraordinary place, with its soaring hexagonal basalt rock formations, is the source of numerous myths and legends.

The drive along the lovely North Antrim Atlantic coast, through the Glens of Antrim, rivals the far better known Kerry coast. A stop at Bushmills to visit the distillery and perhaps sample its wares is worthwhile. Carrickfergus Castle, overlooking a pretty harbour, is the best preserved Norman Castle in Ireland, its “Knight Ride” exhibition is an lively way to take a step back in time. 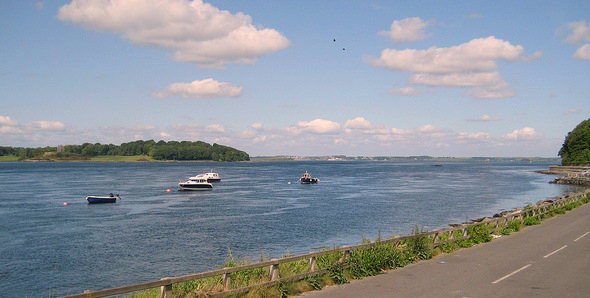 This tour takes us along the edge of Strangford Lough as we travel down the Ards Peaninsula, bordered by the Lough on one side and the Irish Sea on the other. Mount Stewart House, home of the Lords of Castlereagh, is a 19th century great house with a splendid interior, but it is the gardens, among the best in Europe, that are the main attraction. From the village of Portaferry we take the short ferry crossing to Strangford.

Newcastle, a popular resort town, marks the beginning of a drive along the scenic Mourne Coast, with plenty of opportunity to see the Mountains of Mourne as they sweep, majestically, down to the sea. From Newry we return to Belfast via Hillsborough, a showpiece Georgian town with many antique shops. The town is dominated by Hillsborough Castle, where many visiting dignitaries to Northern Ireland, including US Presidents, have stayed. 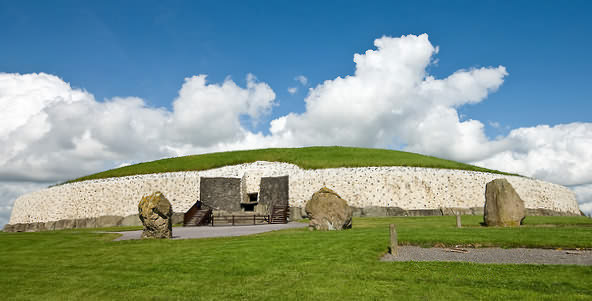 Today we will have some fascinating glimpses into various aspects of Ireland’s distant past. The megalithic passage tomb at Newgrange date from around 3000 BC and is thought to be the oldest astronomically orientated structure in the world, 1000 years older than Stonehenge and older even than the pyramids.

At Monasterboice the ruins of an early Christian settlement include three richly carved high crosses which date back to the 12th century. Mellifont Abbey with its layout of dormitories, refectories, chapter house and kitchens intact, provide a fascinating glimpse into the lives of monks 1000 years ago. Travelling towards Dublin we pass through the picturesque village of Slane and visit the Hill of Tara, ancient seat of the high Kings of Ireland. 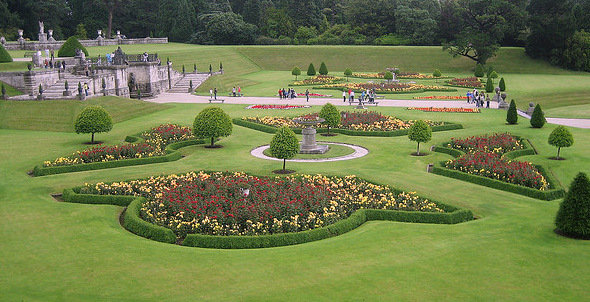 Powerscourt Gardens are among the finest formal gardens in Ireland, wonderfully situated at the foot of the Sugar Loaf Mountain and with a famous waterfall as well as over 40 acres of formal and informal gardens. The monastic settlement of Glendalough was founded by St Kevin in 498 AD with the famous 110 ft high tower dating from about 1000 years later.

Avondale House in nearby Rathdrum was home to Charles Stewart Parnell, leader of the Home Rule Party in the early 1880’s. The beautiful Vale of Avoca has a  tradition in gold and copper mining some remnants of which can be seen in the countryside. The village is now home to Avoca Handweavers, who produce a unique range of well designed Irish craft pieces and fashionable clothing.

First stop is the magnificent Georgian mansion of Castletown House built around 1730 and a world-class example of Palladian architecture. The Curragh is the horse-racing capital of Ireland and we stop nearby for a tour of the Irish National Stud and its famous Japanese Gardens.

Emo Court in Laois was designed by the architect James Gandon in 1790 for the Earls of Portarlington and is surrounded by beautiful formal gardens adorned by statuary and a lovely lakeside walk. In Limerick the restored King John’s Castle is well worth a visit, as is the Hunt Museum. Frank McCourt fans can take a walking tour around some of the places mentioned in his best-selling memoir “Angela’s Ashes”.

Today’s activities will be determined by departure times. For those with late flights it is a good opportunity to see any places that were missed yesterday in Limerick or to spend a few hours atBunratty Castle and Folk Park, which is very close to Shannon Airport.

We will be at your service right up to your departure, when it will be time for you to say farewell – not goodbye! – to Ireland and head home with some wonderful memories. Come back soon!