The itinerary belows assumes you will arrive at and depart from Shannon Airport, but can easily be adapted if you have different plans.

While the tour concentrates on places associated with Irish American Presidents, it also visits other locations strongly associated with the stories of the millions of Irish people who emigrated to the USA over the last 200 years. We will also take in other sights and centers of interest which are in the regions we visit and pass through. 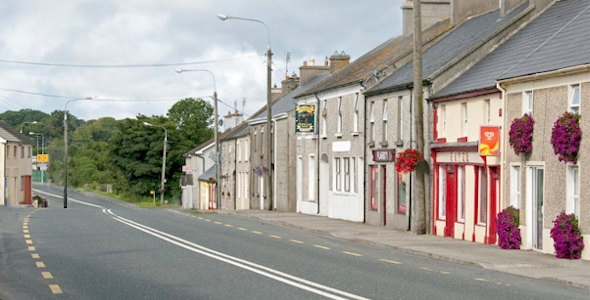 The sleepy village of Moneygall woke one morning in 2008 to the news that it had discovered a long lost son – none other than President Barack Obama, whose maternal great-great-great-grandfather, Falmouth Kearney, was baptized in the local church.

After a stroll though the mainsteet and a look around the church we will move for a tour of the medieval capital of Ireland, Kilkenny. Another Obama relative, Bishop John Kearney, is buried in the 800 year old cathedral, St Canice’s, in Kilkenny. 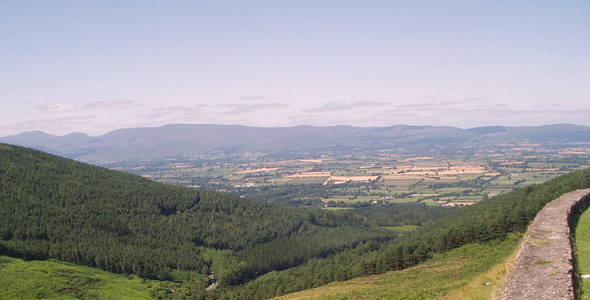 The beautiful countryside of Co Tipperary must have been a familiar site to Michael Regan, great-grandfather of Ronald Reagan who was born and grew up there. As well as visiting his home town of Ballyporeen, today’s tour will take us to the famous Rock of Cashel, to Cahir Castle and Mitchelstown Caves.

On our return journey to Kilkenny we will stop off at Desert, close to Callan, where James Hoban, the architect who designed the White House in Washington was born. 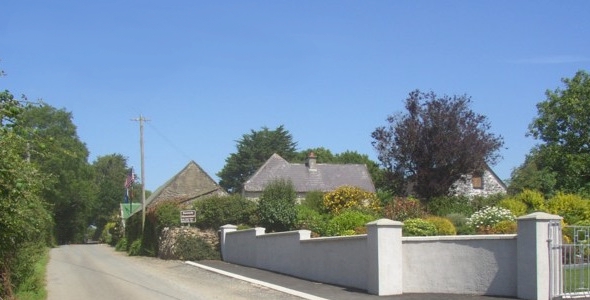 The Kennedy Homestead is just as it was when John F Kennedy‘s great-grandfather Patrick Kennedy left for America and houses a fascinating collection of family memorabilia. Many emigrants like him sailed to a new life in ship just like the 19th century barque, or three masted ship, the Dunbrody which is docked in New Ross.

En route to Dublin we will tour the Garden County of Wicklow, with a stop in, among other places, Glendalough, an ancient monastic settlement nestled in a beautiful lake valley. 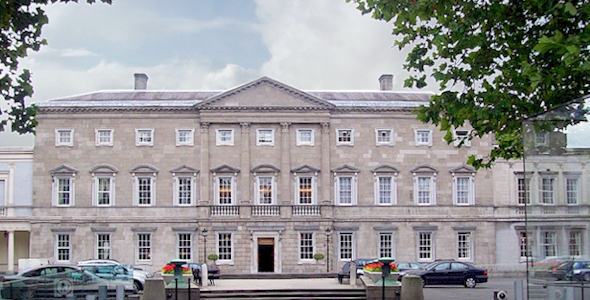 A day to explore Ireland’s capital and for those with an interest in history or politics, the National Museum is a must. If the building next to the museum, Leinster House, home of the Irish parliament, looks faintly familiar, it is because James Hoban is believed to have seen the plans for it before he left Ireland and to have drawn on them when designing the White House.

Among other must-sees are Trinity College, the Chester Beatty Library and Christ Church Cathedral. A visit to the Pheonix Park to see the ‘Irish White House’ or residence of our president and the very impressive residence of the American ambassador to Ireland is also worthwhile. 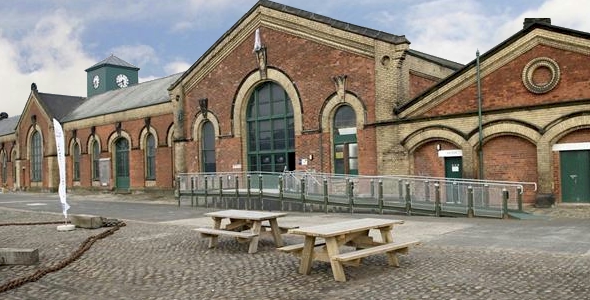 We will detour from the Dublin Belfast road today to visit Brú na Boinne, the largest and one of the most important megalithic sites in Europe.  Nearby the Battle of the Boyne center sits at the site of a famous battle in 1690 that changed the course of Irish and English history and which resonates in Ireland still.

Belfast is the home port of the Titanic, which was built here and launched with much fanfare in May 1911. At the Titanic Dock and Pumphouse the dry dock where the ship was built can be seen, along with excellent displays describing its construction. The Somme Heritage Center recreates the battlefields of WW1 with chilling reality and has many exhibits of great historical interest and importance. 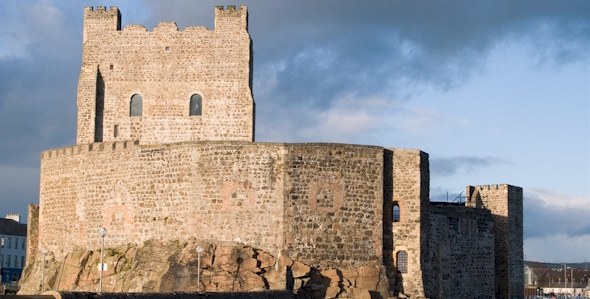 Carrickfergus Castle is imposingly situated overlooking Belfast Lough, and must have been a familiar site to Andrew Jackson‘s parents who lived nearby  in a simple thatched cottage, now the Andrew Jackson Centre.  Larne, a port town on the coast road as we head north, was the departure place for many emigrants, including Irish ancestors of Andrew Johnson and Theodore Roosevelt.

Short detours will take us to the home places of forebears of Chester Arthur, William McKinley and Grover Cleveland. No visit to this area is complete without seeing the remarkable basalt rock formations at the Giant’s Causeway and a trip to the Old Bushmills Distillary is also worth including. Another wonderful coastal drive takes us via Dunluce Castle, teetering precariously over the Atlantic, to Derry. 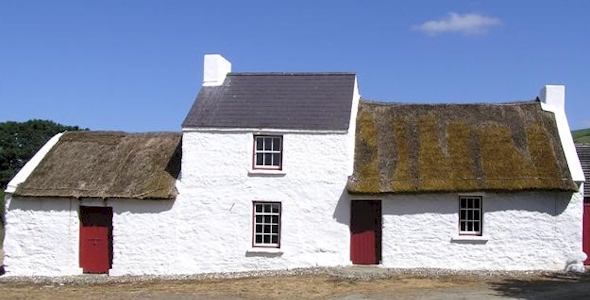 Close to Strabane, the Wilson Ancestral Home, a small ‘white house’ in itself,  houses an exhibition about Woodrow Wilson’s Ulster background. His grandfather was a printer, and it’s often said both he and John Dunlap, who printed the first copies of the Declaration of Independence, learned their trade in nearby Gray’s Printers– they didn’t, but the print museum there is still a very interesting stop.

The Ulster American Folk Park is a wonderful outdoor museum which shows what life was like for emigrants from Ulster both before and after their arrival in America. The park is built on land once owned by the family of Thomas Mellon, of banking fame, and the cottage where he was born in February 1813 still stands. The park is the location of the Centre for Migration Studies with its Irish Emigration Database and Library, of great interest to those tracing their Irish roots.

Fermanagh is lake country, and this morning a short boat trip takes you to Devenish Island and one of the finest monastic sites in Ireland including a 12th century round tower. Other options include Enniskillen Castle, the majestic and beautiful Marble Arch Caves, a tour of the Belleek Pottery factory or a visit to the unique Sheelin Lace Museum.

In the afternoon we move on, via Sligo and a visit to Drumcliffe where the poet WB Yeats is buried, to Westport. This is the perfect place to enjoy an evening of traditional music in a local pub owned by a member of the Cheiftans, Matt Molloy. 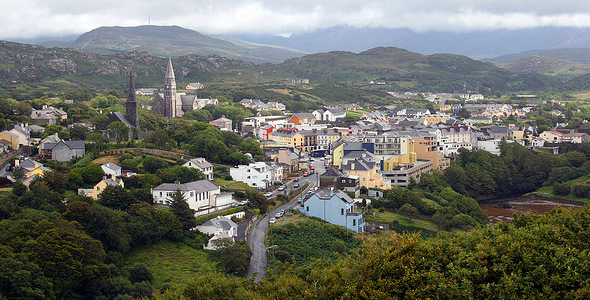 Our last full day’s touring takes us into the heart of the Connemara National Park, a wild and beautiful area much loved by artists and photographers. Kylemore Abbey, now a convent boarding school but original a hunting lodge is an interesting stop and there are many craft workshops and art galleries along the way, particularly in the regional capital, Clifden.

The late afternoon is a good time to stroll around the streets of Galway and take in the fine views over Galway Bay, before an evening of music and good food. Galway has a lively nightlife and we would be happy to make bookings for those of our guests who may like an evening at the Theatre.

Depending on your departure time, we can organize a full or half day tour while making our way to Shannon Airport. In any case, we will be at your service until you step on to your flight home, with memories that will last a lifetime.